1. The Two Gentlemen of Verona 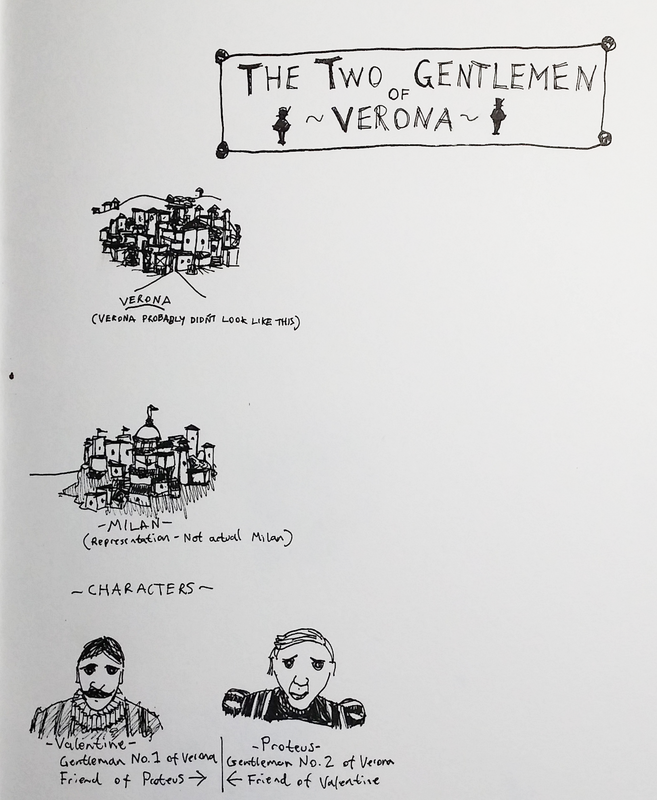 In Verona, Valentine, a young nobleman, bids farewell to Proteus, his friend. Valentine is travelling to Milan, to stay with the Duke, and to study. Proteus remains in Verona, with his love Julia. Antonio, Proteus’s father, decides to follow Valentine's example and send his son to Milan. Proteus and Julia tearfully part, after exchanging rings. Meanwhile in Milan, Valentine has fallen in love with the Duke's daughter, Sylvia. Soon after this, Proteus arrives in Milan and promptly falls in love with Sylvia too. Valentine confides in Proteus that he and Sylvia have a plan to escape from Milan and to elope. Jealous, Proteus tells the Duke, who thanks him and banishes Valentine from Milan.

In Verona Julia plans to disguise herself as a man to go and visit her love Proteus in Milan. When she arrives in the Duke's court, as a boy named Sebastian, she sees Proteus wooing Sylvia, who rejects him.

Valentine, wandering the woods outside Milan, is captured by outlaws, who, upon seeing he is educated, make him their king. In Milan, Sylvia, with the aid of her friend Sir Eglamour, escapes Milan to find Valentine. Sylvia and Eglamour are attacked by bandits, but Eglamour runs away, leaving Sylvia alone. Proteus, the Duke, and Julia, masquerading as Sebastian, go in search of Sylvia. Proteus finds her, and rescues her from the bandits, proclaiming his love for her. When she rejects him, again, he attempts to rape her. Valentine rescues Sylvia from Proteus, who immediately apologises. ‘Sebastian’ then reveals her true identity, and Proteus falls back in love with her. The Duke forgives Valentine, and suggests that Proteus and Julia’s wedding be on the same day as Valentine and Sylvias’.